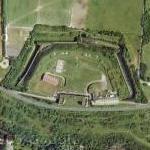 By kjfitz @ 2006-04-15 00:56:28
@ 50.854231, -1.068437
Portsmouth, United Kingdom (GB)
The forts on Portsdown Hill were built as a result of the 1859 Royal Commission to defend the Portsmouth dockyard (which is 8 kilometres away) from a possible attack from inland, as the development of rifled gun barrels made it possible for an invading army to land elsewhere, circle around to the top of the hill and bombard the city from there, rendering the existing Hilsea lines at the bottom of the ridge useless. A series of 5 forts were planned along the 7 miles (10 km) of the ridge. From west to east they are forts Fareham, Wallington, Nelson, Southwick, Widley. The line was finished off at the eastern end with Crookhorn Redoubt and Farlington Redoubt.