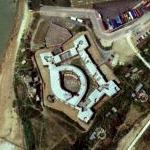 By kjfitz @ 2006-06-03 02:22:38
@ 51.938882, 1.320065
Felixstowe, United Kingdom (GB)
Landguard Fort has a long and rich history. Originally built at the behest of Henry the Eighth it is the only fort in England to have repelled a full scale invasion attempt. This was in 1667 when Captain Nathaniel Darell and 500 men defeated Admiral de Ruyter's Dutch force on 2nd July (Darell day is still celebrated). Since then the Fort has seen many changes during its time under military control up to 1956, when the army finally marched out. What remains now are parts of the walls and casemate rooms within, dating from the Fort of 1744 and later changes made during Queen Victoria's reign.

During the nineteenth century Victorian engineers made massive improvements to the Fort, which included the construction of a curved seven casemated battery facing the river. On two of the bastions casemated batteries were also constructed and another on the SE. curtain wall. Where there had once been a fifth bastion on the SW. side of the Fort a Caponier was built, with a large bomb proof shelter at the end of it.

The main armament for the Fort was 12.5 and 10 inch Rifled Muzzle Loaded guns. Beneath the casemates and gun positions are the magazines, a labyrinth of passageways, shell, powder and cartridge stores. In some places the hoists for raising ammunition to the guns are still in situ. A separate passageway contained the lamps for lighting the magazines (keeping naked flames away from the potential hazards of powder and ammunition).

A large curved barrack and office section was built inside the Fort, creating an inner keep. High up in the corner between Harwich bastion and the curved casemated section can be seen the submarine minefield observation position with its thick steel roof. At the other end of the curved battery, again on the roof, is a concrete Fire Control tower. Built in the early 1900s it had various sections added to it over the years. To the west of the Fort is Darell's Battery, originally built in 1901 and armed with two 4.7 inch guns. In WW2 two twin six pounder guns were installed. This area is at present fenced off for safety reasons.

South of the Fort is Right Battery, built in 1901 it had two six inch and one 10 inch gun. During WW2 a further two six inch batteries were added. The whole of Right Battery is now within a bird sanctuary and can be visited by prior arrangement.
Links: www.landguard.com, en.wikipedia.org
709 views