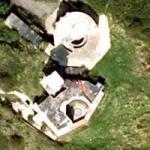 The first fortification built on the site was a blockhouse, constructed in 1534 during the reign of Henry VIII. This site was abandoned within ten years. After the death of Henry VIII the site was rearmed. By 1625 the site had again fallen into disrepair and Harwich was considered to be defenceless.

The site now remained out of use until a redoubt of ten guns was built in 1810. In 1862 these guns were upgraded as a result of the 1860 Royal Commission on the Defence of the United Kingdom.

By the 1880s the fort was considered outdated and in 1889 work began on a totally new fort, which was completed in 1892. After World War I the fort was disarmed and sold. In 1940 it was bought back into service as a consequence of World War II. The fort was then decommissioned in 1956.
Links: en.wikipedia.org
549 views