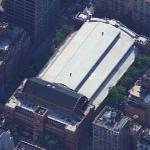 The building was named a National Historic Landmark in 1986.

Currently, the building is leased by Park Avenue Armory which is a not-for-profit arts organization and is used by a number of veterans organizations, women's mental health shelters, and for afterschool programs.

Park Avenue Armory is in the middle of a $200M renovation of the building with architectural firm Herzog & de Meuron. Currently two of the historic rooms have been completed with another 16 planned.