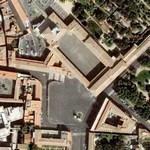 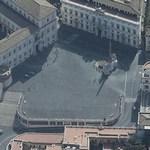 By DonMartini @ 2006-02-25 12:56:25
@ 41.899826, 12.4874
Rome, Italy (IT)
By the 1500s, the Vatican had a reputation as an unhelthy location because of the high incidence of malaria, so Pope Gregory XIII chose this superb site on the highest of Rome's seven hills as a summer residence for the popes. Work began in 1574. The Piazza del Quirinale has buildings on three sides while the fourth is open, giving a splendid view of the city to the great dome of St Peter's in the distance.

Many great architects worked on the palace, before it assumed its present form in the 1730s. Domenico Fontana designed the main facade, Carlo Maderno the huge chapel and Bernini the narrow wing that runs the length of Via del Quirinale. After the unification of Italy in 1870, it became the official residence of the king, then in 1947 of the president of the republic. Today the residence of Ciampi.
1,142 views