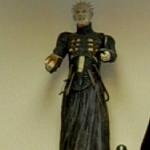 By Mike1989 @ 2013-03-19 01:06:20
@ 56.030799, 14.156855
Kristianstad, Sweden (SE)
Pinhead is a fictional character from the Hellraiser series. Created by Clive Barker and portrayed by Doug Bradley, Pinhead is a prominent figure in the series, mostly featured as the main antagonist. Pinhead is the leader of the Cenobites, formerly human creatures from an extradimensional realm who travel to Earth through the Lament Configuration, and harvest human souls. Depicted as intelligent and articulate, the character was deliberately presented as a departure from the mute or wise-cracking 1980s horror movie villains who preceded him, being based more on Count Dracula.
Links: en.wikipedia.org
453 views