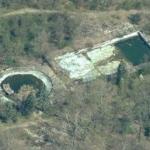 The first public pool in this area was built in 1935 . . . but it's unclear if this is that. The first pool may have been on the adjoining property (Muller's Park) because that's where Muller's old barn was that was destroyed by fire in 1987.

These pools were built in the 30's, 40's or 50's and swimming at the river's beaches eventually came to an end. Even after recreation transitioned from the river to the pools, Pleasureland was beautiful and it thrived with visitors and even concerts in an old pavilion located on the grounds.

Pleasureland closed eventually and the property was abandoned and became overgrown with vegetation. Teenagers frequented the area breaking everything that was left and spray painting graffiti all over the place.

Over the past couple decades, "explorers" have made Pleasureland a stop on their travels in New Jersey, seeking the abandoned places from yesteryear. Many websites have pages and photos dedicated to what Pleasureland became during the years after it closed.

For decades there was talk of getting the land sold to developers for condos but that has never happened which is surprising considering that in Oakland they've wanted to develop every nook and crannie left where a house or more could fit. One day slight problem is this area has been prone to flooding. The Army Corps of Engineers has worked on this problem, spending millions of dollars over the decades.

Finally in May of 2010, a town council resolution authorized purchase of the property which, for some bizarro reason, is being called Heritage Hills. The cost for the 40 acres is $2.2 million. With the aid of local, county and New Jersey's Green Acres open space funding, $600,000 will be the burden of the borough.
Links: theoaklandjournal.com
2,705 views

AKpilotEMT
@ 2010-10-28 07:11:21
Like lots of others, I've explored every part of this property. The old pavilion can easily be seen to the northeast. It's pretty frickin' big, way echoey inside with lots of graffiti.

A lot of old postcard scenes can be found on the interweb showing Pleasureland in its heyday. The next door neighbor Muller's Park survived until the late 80's but Pleasureland closed in the late 60's, I think, and has just sat abandoned to this day.

Anonymous
@ 2016-03-24 05:15:19
Some of this is false. What once was pleasure land is now Great Oak Park. They rushed to open it to prevent the building of houses. It is open now, available to everyone.