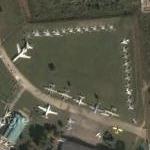 The collection as of 2005 includes over 100 aircraft, including sailplanes and gliders and some 200 aircraft engines. Several of the aircraft displayed are unique in the world. Some of exhibits are only in pieces. The museum also houses a large library and photograph archives.
Links: en.wikipedia.org, www.airliners.net
686 views