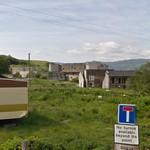 The Portavadie complex was built with the help of local labour from the fishing village 'Tarbert' that lay due west across Loch Fyne. The locals from Tarbert who worked there were told that oil had been found on the west shores Loch. There was never a reason why the project was closed and the site lay redundant from that point on. In the mid eighties the enclosed port was used by a local fish farm company.


Finally, in 2009, 1t was announced that the "ghost village" was to be demolished to allow development of a marina.


In late 2009 the marina was used for the first time to tie up boat for the Scottish series.


The new Portavadie Marina complex opened to the public in 2010 with accommodation, and a bar/restaurant.
Links: en.wikipedia.org
491 views