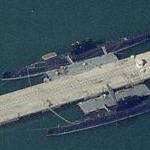 In 1964, the Portuguese government ordered the construction of four of this class to the Dubigeòn-Normándie Shipyard to create the 4th submarine flotilla.

With the first submarine commissioned in October 1, 1967, the Portuguese Navy started to have a submarine able to operate in both coastal and oceanic zones, especially in the Portuguese exclusive economic zone.

The last Albacora class submarine in service with the Portuguese Navy is expected to be replaced by two 214/209PN submarines in 2009.
Links: en.wikipedia.org
1,921 views