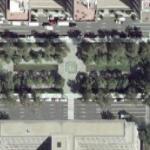 John A. Rawlins (1831-1869) was the primary personal adviser to General Ulysses Grant. Prior to the Civil War, he was part of the California gold rush of 1849 and then returned to Illinois in 1852 to practice law. At the beginning of the war, he helped form the 45th Illinois Infantry and became acquainted with (at that time) Colonel Grant.

The Rawlins statue is an unusually attractive but peripatetic one. It occupied seven other locations and survived a proposal to move it to Rawlins, Wyoming, before come to rest here.

Located across from the Interior Department, this inviting garden offers a mass of blooming magnolias in spring and water lilies in a reflecting pool in the summer. A statue of Major General John A. Rawlins, advisor to General Ulysses S. Grant, oversees this urban oasis.
Links: www.culturaltourismdc.org
552 views