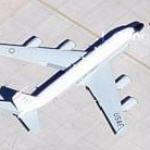 By kjfitz @ 2011-12-16 21:39:50
@ 36.235896, -115.041353
Nellis AFB, Nevada (NV), US
The Boeing RC-135 is a family of large reconnaissance aircraft used by the United States Air Force to support theater and national level intelligence consumers with near real-time on-scene collection, analysis and dissemination capabilities. Based on the C-135 Stratolifter airframe, various types of RC-135s have been in service since 1961. Many variants have been modified numerous times, resulting in a large variety of designations, configurations, and program names.

The RC-135V/W is the USAF's standard airborne SIGINT platform. Its sensor suite allows the mission crew to detect, identify and geolocate signals throughout the electromagnetic spectrum. The mission crew can then forward gathered information in a variety of formats to a wide range of consumers via Rivet Joint's extensive communications suite. The crew consists of the cockpit crew, electronic warfare officers, intelligence operators, and airborne systems maintenance personnel. All Rivet Joint airframe and mission systems modifications are performed by L-3 Communications in Greenville, Texas, under the oversight of the Air Force Materiel Command.
Links: en.wikipedia.org
521 views