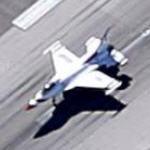 By kjfitz @ 2012-08-26 13:24:07
@ 36.233079, -115.039847
Nellis AFB, Nevada (NV), US
The Thunderbirds are the air demonstration squadron of the United States Air Force (USAF), based at Nellis AFB in Las Vegas, Nevada. They tour the United States and much of the world, performing aerobatic formation and solo flying in specially marked aircraft. The name is taken from the legendary creature that appears in the mythology of several indigenous North American cultures. They are the fastest flying (multiple jet) flight demonstration team in the world.
Links: en.wikipedia.org
694 views