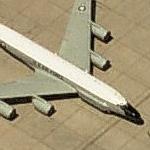 By voldude123 @ 2006-09-29 08:22:08
@ 36.235214, -115.040622
Las Vegas, Nevada (NV), US
The USAF RC-135V/W RIVET JOINT surveillance aircraft are equipped with an extensive array of sophisticated intelligence gathering equipment enabling military specialists to monitor the electronic activity of adversaries. Also known as "RJ", the aircraft are sometimes called "hogs" due to the extended "hog nose" and "hog cheeks". RIVET JOINT has been widely used in the 1990's -- during Desert Storm, the occupation of Haiti, and most recently over Bosnia. Using automated and manual equipment, electronic and intelligence specialists can precisely locate, record and analyse much of what is being done in the electromagnetic spectrum. The fleet of 14 RIVET JOINT aircraft increased to 15 in late 1999 with the addition of a converted C-135B. The jet's conversion cost about $90 million.
Links: fas.org, www.airliners.net
728 views