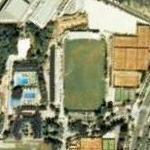 The Real Club de Polo was founded in
1897. It has more than 9,000 members,
and enjoys considerable prestige. Its
facilities include a polo pitch, a
competition arena, a training course for
jumping, four hockey pitches, 31 tennis
courts, two squash courts, two open-air
swimming pools and a social club. The
alterations needed to prepare these
facilities for Olympic use were managed,
executed and financed entirely by
COOB'92.
Links: en.wikipedia.org
719 views