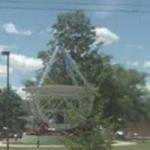 By forthefallendrms @ 2011-10-06 08:22:57
@ 38.430471, -79.816873
Green Bank, West Virginia (WV), US
Reber Radio Telescope is a parabolic radio telescope. It is significant for its pioneering of radio astronomy. Grote Reber was an amateur astronomer who built this telescope in Illinois in 1937, implementing a proposal of Karl Jansky, the discoverer (1931) of radio waves emanating from the Milky Way. It was the second radio telescope ever used in the new field of radio astronomy (after Jansky's dipole array), and the first parabolic radio telescope. The telescope was later moved to Sterling, Virginia, then later to Boulder, Colorado, and finally to Green Bank, West Virginia.
Links: en.wikipedia.org
768 views