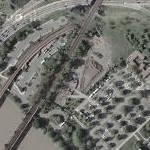 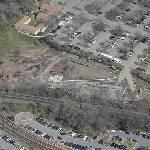 Shortly after dawn on a recent morning, two dump trucks and a water tanker pulled up to a new, unmarked complex of buildings at East Potomac Park, the grassy peninsula near the Jefferson Memorial. The drivers exited their cabs, knocked at a gatehouse with blacked-out windows and waited for a security guard to emerge from behind a locked door.

A few minutes later, a panel of 10-foot-high security fence slid open, and the trucks disappeared inside, leaving the joggers and cyclists along the waterfront none the wiser about their mission.

What goes on beyond the fence is a mystery. The multi-agency review normally required to erect anything on federal parkland did not apply to the beige, metal buildings. The Navy, which operates the site at Ohio and Buckeye drives SW, calls the work a "utility assessment and upgrade" and volunteers nothing more.

"As a matter of policy, we can't go into the particulars," said a Navy spokesman, Lt. Cmdr. Joseph A. Surette.

Frederick J. Lindstrom, acting secretary of the U.S. Commission of Fine Arts, said it is illegal for him to discuss the matter. He did say the Navy started the work without seeking review from the commission, which oversees the city's Potomac River parklands.

Amid the secrecy, theories abound about the four-acre complex, which is dead center in a ring that includes the White House, the U.S. Capitol, the Pentagon, Reagan National Airport and the National War College. Is it a sophisticated sensor station, guarding the 14th Street bridge and other Potomac River crossings? Is it an excavation point for underwater barriers to protect the Washington Channel and Potomac River from submarines? Is it a staging area for Navy Seabees securing underwater cables between the White House and the Pentagon, across the river?

Whatever the case, in a capital where concrete barriers and police roadblocks have become a common and often grating part of city life since Sept. 11, 2001, the Navy compound represents a more ambiguous side to security. It is visible and obscure, hidden in plain sight, billed as temporary but expected to last for years.

And it joins a network of things large and small erected to protect the capital. Wind and radiation tracking instruments sit atop the Federal Reserve. Biowarfare sensors sniff the air in front of the Smithsonian Institution. Antiaircraft systems have been spotted on a rooftop next to the White House and on a Prince George's County riverbank, across the Potomac from Mount Vernon.

For its part, the Navy began work unobtrusively about a year ago on its site near Hains Point, a recreation area known best for its golf course, fishing and "The Awakening," J. Seward Johnson Jr.'s giant sculpture.

The Navy took over the National Park Service land without any announcement. When the agencies that oversee the Mall caught up with the project months later, the hangar-like structures, which cover an excavation area, were visible from Interstate 395.

The agencies' only recourse was to ask the Justice Department to sue the Pentagon. Lindstrom said that was deemed not an option.

After inquiries, senior officials at the Fine Arts Commission and the National Capital Planning Commission were briefed about the security-sensitive project and sworn to silence. The staffs of both commissions, which review many federal agency security requests, were bypassed, and no paper trail was produced.

"The project's sponsors felt it wasn't necessary to bring it to these agencies for their review," Lindstrom said. "It's not quite right -- they should have -- but in hindsight, they did discuss the building and the project and essentially what's entailed there."

Del. Eleanor Holmes Norton (D-D.C.), who has criticized federal security projects for encroaching on life in the District, seldom lets slip an opportunity to make her point. In this case, however, Norton "is aware of what's going on but cannot comment," spokeswoman Doxie McCoy said.

A spokeswoman for the planning commission, Lisa MacSpadden, referred questions to Surette, the Navy spokesman. Surette would not say whether the project is classified or whether it had a name. Nor would he say how much it cost, how many people were on the job or why it was needed. He did say that work under the temporary structures would last about four years, that it complied with local and federal safety and environmental laws and that it would have no impact on traffic.

Mall preservationists say they appreciate the Navy's assurances -- as well as its efforts to protect the nation -- but decry the lack of oversight and public meetings by watchdog agencies.

"What is going on?" said Judy Scott Feldman, head of the National Coalition to Save Our Mall, a group of civic and professional organizations in Washington formed in 2000. "Why the Navy would be doing construction is a question . . . And if the Navy is saying it's purely a construction project, then why is it a secret?"

Temporary facilities have a way of outliving their builders, said Feldman, whose group's Web site has posted a photograph of the project.
Links: cryptome.org
10,851 views

cthippo
@ 2010-09-01 16:40:33
At least one site identifies this as a communications node, and the presence of the three backup generators would tend to support that.