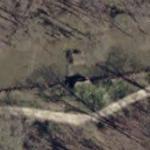 The pier in the middle of the canal [at mile 9.9] was once part of a pivot bridge. The knoll left by the road embankment offers a view of the remains of the circular pivot mechanism. The bridge was built in 1941 to provide access to a Civilian Conservation Corps camp. The canal company had long since ceased operations, but a pivot bridge was still needed because the National Park Service was operating barges in the canal in this area.