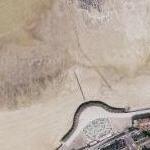 Early pleasure piers were of wooden construction, with iron structures being introduced with the construction in 1855 of Margate Jetty, in Margate, England. Margate was wrecked in storms in 1978 and was never repaired.

Margate Jetty, also known as Margate Pier, which was designed by Eugenius Birch in 1856, has suffered damage from the sea over the years. On 1 January 1877 it was sliced through by a storm-driven wreck that marooned 40 to 50 people. They were not rescued until the next day. The pier survived until 11–12 January 1978, when it was hit by another storm. The storm washed up the planks from the pier onto Margate Beach. The wreck of the pier remained for several years, surviving several attempts to blow it up, before final demolition.