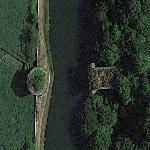 The bridge closed in 1960 when two barges collied, in heavy fog, with one of the columns and two spans of 22-span steel and cast iron collapsed into the river below. The structure collided with the barges and the fuel, oil and petroleum they carried caught fire. Five people were killed in the accident.

What's left today:
Not much of the bridge remains, but one abutment and one remaing tower for the swing bridge still remains beside the canal. At low tide you can also still see the damaged barges. On the other side of the river where the train tracks are still active, you can still see one abutment.
Links: www.forgottenrelics.co.uk, en.wikipedia.org
298 views