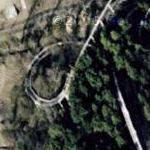 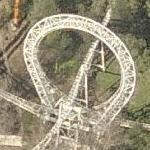 By kjfitz @ 2010-02-07 12:36:11
@ 34.42282546, -118.59645882
Santa Clarita, California (CA), US
The Revolution, formerly known as Great American Revolution and La Revolución, is a steel roller coaster manufactured by Anton Schwarzkopf of Germany and designed by Werner Stengel. The coaster is located in the Baja Ridge area of Six Flags Magic Mountain in Valencia, California. It opened on May 8, 1976 and was the world's first modern roller coaster to feature a vertical loop. It is an ACE Coaster Landmark.

The coaster was named after the American Revolution, which began in 1776, 200 years before the ride opened. Unlike almost all of the previous attempts to create looping roller coasters in the nineteenth and early-twentieth centuries, Revolution's loop was clothoid loop-shaped instead of a completely circular. Eight days later, Corkscrew opened at Cedar Point on May 15, 1976 with a vertical loop and two corkscrews for a total of three inversions.
Links: en.wikipedia.org
1,841 views