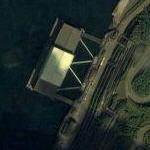 Nuclear weapon storage bunkers have been excavated from a ridge. From here British-designed and built nuclear warheads can be fitted to the Trident missiles (built by Lockheed Martin). Whilst the warheads themselves are British-owned and built, the delivery system is not actually owned by the United Kingdom and instead it has ownership rights to some 58 missiles from a "pool" shared with the U.S. Navy, this is a necessary capability. Whole missiles can be lifted out of or into a submarine, however the missiles are normally serviced at the U.S. Navy facility at Naval Submarine Base Kings Bay in Georgia.

Initial construction took place between 1963, when Faslane was chosen as the new Polaris base, and 1968, when the first Polaris boat began its patrol. Safety considerations required that the armament maintenance and storage facility have its own berth and be at least 4,400 feet from the main facility, whilst operational considerations dictated that the two facilities should be within an hour's sailing time. Coulport, on the opposite peninsula, met both of these requirements. Additional construction took place during the 1980s to support the Trident missile programme.
Links: en.wikipedia.org
1,642 views