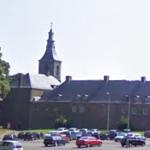 By kkeps @ 2010-06-17 10:39:42
@ 50.866994, 6.078943
Kerkrade, Netherlands (NL)
Rolduc is a major Roman Catholic seminary of priestly formation and an affiliated conferencing center in Kerkrade in the Netherlands. The name comes from Rode-le-Duc, an older French name for the neighboring German city of Herzogenrath.

In 1104 Augustinian monks founded an abbey, called Kloosterrade, to the west of a place called Rode, near the river Wurm. Rode became s-Hertogenrode or s-Hertogenrade (Dutch for "the Duke's Rode") after the Duchy of Brabant took control over the region; in French it was called Rolduc or Rode-le-Duc. In 1815, when the Kingdom of the Netherlands was formed (see Vienna Congress), the border was drawn through the town; the eastern part becoming Prussian Herzogenrath and the western part (including the abbey) becoming Kerkrade. The former abbey is now the Rolduc Congress Center in Kerkrade.
Links: en.wikipedia.org
681 views