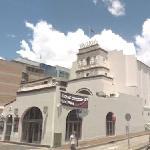 The theater's main entrance is surmounted by an impressive arch and an ornate quasi-Spanish Mission tower. The open forecourt is flanked by an arcade of shops.

Originally, the theater featured a Christie 3Manual/10Ranks organ which was opened by Eddie Horton. It cost approximately $AU32,000 and was reputedly the largest organ to be installed in an Australian theater. In 1958, it was dismantled and sold, and now resides in nearby suburban Castle Hill Entertainment Centre.

One of the foremost Australian theater circuits 'Hoyts', purchased the property in 1946. During World War II, for safety reasons, the beautiful ceiling lights in the auditorium were removed and never replaced. The ceiling dome still remains intact.

In 1974 Hoyts attempted to sell the Roxy, but the National Trust of Australia, classified the cinema as an important example of a suburban picture palace. Because of this ruling, Hoyts decided to carve up the magnificent Spanish auditorium into three cinemas in 1975 at a cost of $AU1,200,000.

It reopened as a triplex on September 15, 1976. The beautiful proscenium was lost when a wider screen and new curtains were placed further forward into the auditorium. However, the ceiling and upper section of the auditorium, the foyers, the front courtyard, and facade were left intact. Under the balcony was divided into two screens, while the main auditorium served as a third screen.

In July 1996, Village Theatres took control of the Roxy and it became known as the Village Roxy 3. The Roxy at Parramatta closed as a cinema on March 27, 2002 after 72 years as a cinema.

After laying empty for a period of time, the building was purchased by new owners who commenced a renovation of the building. It re-opened in early-2006 as an entertainemt venue, with restaurant, Bars and a 700 seat cabaret/music venue in what had originally been the former balcony area.

In 1974 the Roxy became the second cinema in NSW to be classified by the National Trust of Australia.
Links: www.theroxy.com.au
394 views