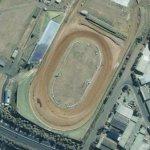 The track was previously known as Sydney Speedway and Parramatta City Raceway. In June 2009. the track's owner, Brian Healey, passed away after suffering a heart attack. A group of car owners and local businessmen joined to purchase the track and renamed it Sydney Speedway in November 2009.

The track was renamed after Valvoline became a title sponsor in 2013. The track was sold to Barry Waldron in 2014.
Links: valvolineraceway.com.au
681 views