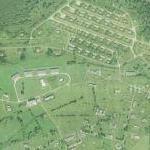 It is a large military site and is situated north of the A48 road four miles west of Chepstow and 12 miles (19 km) east of Newport. Since 1993 it has been used for a variety of military and civil purposes, including field exercises, car rallying, storage and breakdown of railway vehicles, nature preservation, and playing Airsoft.

RAF Caerwent was transferred to US administration after Charles de Gaulle expelled the US military from France in 1967. Caerwent thus became part of the US Army European 'theatre reserve stocks' under the command of the United States Army's "47th Area Support Group Reserve Storage Activity", with a Royal Air Force Liaison Party also present.

At its height Caerwent was the largest ammunition supply depot in Western Europe, storing over 80,000 tonnes of conventional munitions. In 1990 Caerwent shipped 12,000 tons of ammunition to the Middle East and played a critical part in Operation Desert Shield and Desert Storm.

Following the change in the political climate in Europe and subsequent scaling down of operations, the US Army announced it was to close down their storage operations at the establishment in June 1992. Over 60,000 tonnes of munitions were moved out over a period of less than ten months. The last batch was removed by train on 19 July 1993. The formal closure ceremony took place on 20 August 1993.
Links: en.wikipedia.org
596 views