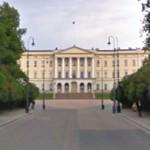 By Dania @ 2010-02-09 10:15:25
@ 59.915464, 10.733125
Oslo, Norway (NO)
The Royal Palace (Norwegian: Slottet or formally Det kongelige slott) in Oslo was built in the first half of the 19th century as the Norwegian residence of Norwegian and Swedish king Charles III (Carl Johan, Charles XIV of Sweden) and is used as the official residence of the present Norwegian Monarch. The crown-prince couple resides at Skaugum in Asker Municipality outside Oslo, while the three princesses of Norway live on estates in Oslo, Fredrikstad and Rio de Janeiro, Brazil.
Links: en.wikipedia.org
566 views