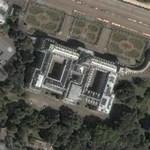 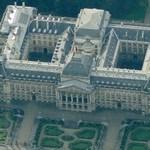 By DonMartini @ 2006-02-24 03:37:45
@ 50.841645, 4.362946
Brussels, Belgium (BE)
During the Austrian rule in the 18th century, empress Maria-Theresia preferred not to have the old palace rebuilt because she didn't want the Austrian governor in Brussels to feel himself like a king. Only four houses where built on the site where the palace now stands.
It was William I, king of the reunited Netherlands, who decided in 1815 to rebuild these houses to turn them into a royal palace. This was finished in 1829. One year later Belgium became independent and the new king of Belgium, Leopold I, decided to use the new palace as his residence. It was king Leopold II, who had the original building turned into the palace like we now know it. This transformation ended in 1903.

The palace was used as the residence of the Belgian King until after the death of Queen Astrid in 1935, when her husband Leopold III, decided to move his residence to the castle of Laken. His successors also resided in Laken. The royal palace in the centre is now used as the office of the king and as the residence of the crown prince.
The royal palace harbours a museum called Belle-vue with a collection about the Belgian royal dynasty.
1,402 views