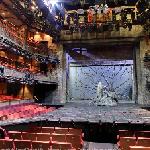 By Mike1989 @ 2013-01-22 04:46:49
@ 52.190627, -1.703746
Stratford-Upon-Avon, United Kingdom (GB)
The Royal Shakespeare Theatre (RST) is a 1,040+ seat thrust stage theatre owned by the Royal Shakespeare Company dedicated to the British playwright and poet William Shakespeare. It is located in the town of Stratford-upon-Avon - Shakespeare's birthplace - in the English Midlands, beside the River Avon. The Royal Shakespeare and Swan Theatres re-opened in November 2010 after undergoing a major renovation known as the Transformation Project.
Links: en.wikipedia.org
519 views