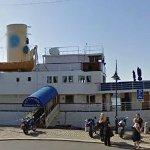 1940 Marieholm was acquired of the Naval Administration, renamed HMS Marieholm and used initially as a radio station in connection with Hårsfjärden radio. From 1950 she served as command vessel of the coastal fleet. Marieholm was taken from naval service in 1976.

The vessel was sold in 1977 to private interests and went under three years of ferry services on the routes Sandefjord - Gothenburg and Malmo - Copenhagen. After some years of decline, Marieholm was refurbished and is now located as a restaurant ship in central Gothenburg.
462 views