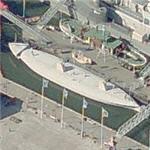 By kjfitz @ 2007-12-22 23:50:44
@ 57.709103, 11.959452
Gothenburg, Sweden (SE)
A monitor was a type of warship used by some navies between the 1860s and the Second World War. The monitors of the 19th century were turreted ironclad warships inspired by USS Monitor; as well as coastal ships which closely followed her design, the term 'monitor' also encompassed more flexible breastwork monitors, and was sometimes used as a generic term for any turreted ship. In the 20th century, the term 'monitor' was revived for shallow-draft armoured shore bombardment vessels, particularly those of the British Royal Navy.
Links: www.goteborgsmaritimacentrum.com
1,108 views