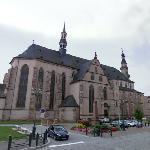 By kkeps @ 2010-03-06 10:50:52
@ 48.540817, 7.496456
Molsheim, France (FR)
The former Jesuit Church (Église des Jésuites), nowadays the parish church Sainte-Trinité-et-Saint-Georges is the main Roman Catholic sanctuary of Molsheim, France, and the principal 17th century church building in the Rhine Valley. The church was built between 1615 and 1617 by the German architect Christoph Wamser, and consecrated on 26 August 1618. Molsheim's Jesuit church is considered one of the foremost examples of Gothic Survival architecture or, as it is called in German, Nachgotik (posterior Gothic). It is listed as a Monument historique since 1939 by the French Ministry of Culture.
Links: en.wikipedia.org
427 views