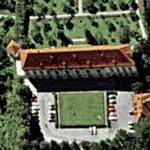 By adrbr @ 2008-04-17 14:15:04
@ 48.258077, 11.432932
Dachau, Germany (DE)
The Palace of Dachau in Bavaria was constructed as a medieval castle and became the favourite residence of the Bavarian dukes in the 16th century. The building was therefore extended to a massive four wing complex with a court garden, according to plans of Heinrich Schöttl.

Only one wing still exists, the others were demolished in the early 19th century. The still existing southwest tract was constructed by Hans Wisreutter 1564 - 1566 and redesigned by Joseph Effner 1715 - 1717 in baroque style. The main sight of the palace is the banqueting hall with its coffered renaissance ceiling, designed in 1566 by Hans Wisreutter.
Links: www.schloesser.bayern.de
787 views