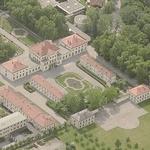 Fürstenried Palace was the residence of the former Electress Maria Anna from 1778 to 1796. The palace served as domicile for King Otto of Bavaria from 1883 onwards until his death. Since 1925 the Catholic Retreat Hostel for spiritual exercises has been housed in Fürstenried Palace.
Links: www.erzbistum-muenchen.de
2,120 views