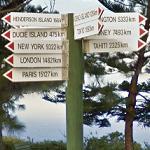 Pawala Valley Ridge is the highest point of the Pitcairn Islands, a British overseas territory in the Pacific Ocean, with an altitude of 347 metres (1,138 ft).