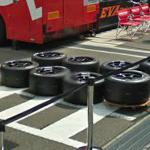 By kuressaare @ 2012-02-24 14:25:01
@ 35.372751, 138.929002
Gotemba, Japan (JP)
A slick tyre (also known as a "racing slick") is a type of tyre that has no tread, used mostly in auto racing. The first production "slick tyre" was developed by a company called M&H Tires in the early 1950s for use in drag racing. By eliminating any grooves cut into the tread, such tyres provide the largest possible contact patch to the road, and maximize traction for any given tyre dimension. Slick tyres are used on road or oval track racing, where steering and braking require maximum traction from each wheel, but are typically used on only the driven (powered) wheels in drag racing, where the only concern is maximum traction to put power to the ground.
Links: en.wikipedia.org
378 views