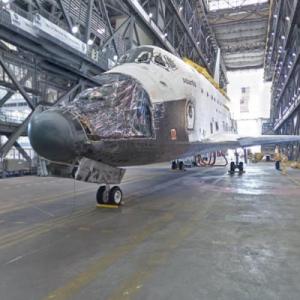 By Mike1989 @ 2012-08-02 00:31:57
@ 28.5864984, -80.6509447
Cape Canaveral, Florida (FL), US
The Space Shuttle Atlantis (Orbiter Vehicle Designation: OV-104) is a Space Shuttle orbiter in the Space Shuttle fleet belonging to the National Aeronautics and Space Administration (NASA), the spaceflight and space exploration agency of the United States. Atlantis was the fourth operational (and the next-to-the-last) Space Shuttle to be constructed by the Rockwell International company in Southern California, and it was delivered to the John F. Kennedy Space Center in eastern Florida in April 1985. Atlantis was the only orbiter which lacked the ability to draw power from the International Space Station while docked there; it had to continue to provide its own power through fuel cells.
Links: en.wikipedia.org
2,254 views