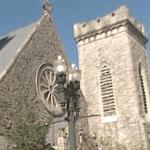 By kkeps @ 2008-11-20 14:52:08
@ 30.328462, -81.658901
Jacksonville, Florida (FL), US
Originally known as Trinity Methodist Episcopal Church, the Snyder Memorial Methodist congregation was founded in 1870. Following the destruction of its church during the 1901 Fire, plans were immediately made to erect another building on the same site. Work began late in 1902, with the first services held in the new building one year later. Upon its completion, the church was renamed Snyder Memorial, in honor of former pastor E.B. Snyder, whose children had donated generously toward the rebuilding effort. This Gothic Revival edifice was constructed at an approximate cost of $31,000 and, according to newspaper reports, built of "granite rubble trimmed with Indiana limestone." This church is a fine tribute to the craftsmen who came to rebuild Jacksonville after the big fire. Carved stone detailing is in abundance. A crenelated bell tower projects from the northeast corner of the sanctuary. An intricate rose window graces the facade. The building remains virtually unchanged from its original construction. Its highly visible site overlooking Hemming Plaza adds to Snyder Memorial's prominence in the architecture of Downtown.
Links: www.waymarking.com
686 views