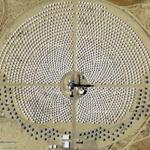 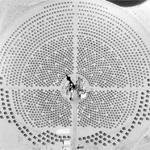 By dda @ 2006-05-25 19:05:51
@ 34.871954, -116.834149
Barstow, California (CA), US
Solar One is a pilot solar-thermal project in the Mojave Desert just east of Barstow, California. Solar One was the first test of a large scale thermal solar power tower, power plant. Solar One was designed by the Department of Energy (DOE), Southern California Edison, LA Dept of Water and Power, and California Energy Commission. It was located in Daggett, California, which is about 10 miles east of Barstow. Solar One's method of collecting power was based on concentrating the sun's energy to produce heat and run a generator. It had a number of large mirrors, or heliostats, that track the sun, reflecting the sun's light on a large tower. A black-colored receiver, on top of the tower, transferred the heat to an oil transfer fluid. The heat was then used to boil water, which turned turbines, much like a traditional power plant. It produced 10 MW of electricity by using 1818 mirrors with a total area of 72,500 m² (780,000 ft²). Solar One was completed in 1981 and was operational from 1982 to 1986. Later redesigned and renamed Solar Two, it can be seen from Interstate 40 where it covers a 29 hectare (72 acre) site. During times of high winds, blowing dust is sometimes illuminated by the reflected sunbeams to create an unusual atmospheric phenomena. These beams of light were depicted in several scenes, and a painting, in the movie Bagdad Cafe, which was filmed nearby.

In 1995 Solar One was converted into Solar Two, by adding a second ring of 108 larger 95m² (1,000 ft²) heliostats around the existing Solar One, totaling 1926 heliostats with a total area of 82,750 m² (891,000 ft²). This gave Solar Two the capability of redirecting the equivalent of 600 suns and the ability to produce 10 megawatts. Solar Two used molten salt, a combination of 60% NaNO3 and 40% KNO3, as an energy storage medium instead of water or oil. This helped in energy storage during brief interruptions in sunlight due to clouds. The molten salt also allowed the energy to be stored in large tanks for future use such as night time.

Solar Two was decommissioned in 1999, and was converted by the University of California, Davis, into an Air Cherenkov Telescope in 2001, measuring gamma rays hitting the atmosphere.
Links: en.wikipedia.org
3,837 views