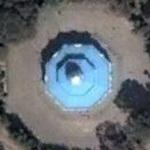 In 1930 this church was the site of the coronation of Emperor Haile Selassie, who is the focus of Rastafarian devotion and also known as King of Kings, Elect of God, Conquering Lion of the Tribe of Judah. The church is a place of pilgrimage for Rastafarians.
Links: www.sacred-destinations.com
928 views