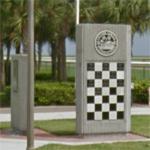 Just to the left of this monument is a memorial to British driver Dan Wheldon, who died in an IndyCar race at Las Vegas in 2011. Wheldon called St. Petersburg his adopted hometown.
Links: www.flickr.com, en.wikipedia.org
353 views