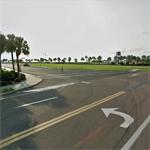 This section of road serves as Turn 10 on the annual IndyCar street course race held here. On April 3, 2005, Wheldon made a pass for the lead in this turn on his way to winning the event. Wheldon and his family lived in St. Petersburg since 2005. He perished in a racing accident at the Las Vegas Motor Speedway on October 16, 2011.
Links: www.indycar.com
543 views