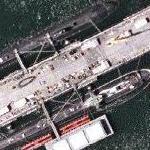 By nic @ 2005-04-16 17:43:41
@ 32.689637, -117.235891
San Diego, California (CA), US
The Naval Submarine Base in Point Loma provides pierside berthing and support services for submarines of the U.S. Pacific Fleet and is the site of the Navy Alcohol Rehabilitation Center. Eight attack submarines, one submarine tender and one floating dry-dock are homeported at the base. There are no ballistic missile submarines homeported in San Diego.

The Navy Submarine Support Facility was established in November 1963, on 280 acres of the land. On November 27, 1974 the base was re-designated a shore command, serving assigned submarines, Submarine Group Five, Submarine Squadrons Three and Eleven, Submarine Development Group One, and Submarine Training Facility. On October 1, 1981 the base was designated as Naval Submarine Base. Starting in April 1995, several commands were decommissioned or their homeports were changed, to meet the down-sizing requirements of the Navy. Commands throughout San Diego were regionalized in an effort to provide services while managing a reduced budget. Current tenant commands include COMSUBRON ELEVEN, COMSUBDEVRON FIVE, Submarine Training Center Pacific (SUBTRAFAC), 7 submarines, a submarine tender (USS MCKEE), one dry dock (ARCO), and the Navy's Substance Abuse Rehabilitation Department (SARD).
Links: www.globalsecurity.org
5,454 views