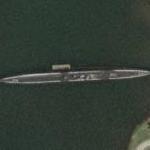 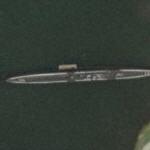 Bowfin was laid down by the Portsmouth Naval Shipyard at Kittery, Maine on 23 July 1942; launched on 7 December 1942 by Mrs. Jane Gawne, wife of Captain James O. Gawne.; and commissioned on 1 May 1943, Commander Joseph H. Willingham in command.

Bowfin departed New London, Conn., 1 July 1943 and arrived at Brisbane, Australia 10 August 1943. Between 16 August 1943 and 4 July 1945 she completed nine war patrols operating from the Netherlands East Indies to the Sea of Japan and the waters south of Hokkaido. Bowfin sank 15 merchantmen and one frigate for a total of 68,032 tons. She also shared credit with Aspro (SS-309) for a 4,500-ton merchantman.

Bowfin sunk Tsushima Maru, an evacuation ship for schoolchildren, on her way from Okinawa to Kagoshima on August 21, 1944 . 1,484 civilians including 767 schoolchildren were killed.

Leaving Pearl Harbor 29 August 1945 Bowfin sailed to the east coast, arriving at Tompkinsville, N.Y., 21 September. She operated with the Atlantic Fleet until placed out of commission in reserve at New London, Conn., 12 February 1947.

On 1 December 1971, Bowfin was decommissioned for the final time and stricken from the Naval Vessel Register. She is preserved as a memorial at Pearl Harbor, Hawaii.