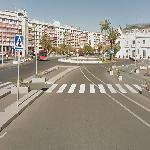 The circuit uses the roads skirting the city's harbour and America's Cup port area – including a section over a 140-metre-long (460 ft) swing bridge, and also includes some roads designed exclusively for racing purposes by the German architect Hermann Tilke, who also designed the infrastructure buildings for the circuit. The circuit also featured a section that wasn't on public roads, but on a permanent part where there was once a gas factory.

The circuit has not been used since a deal fell through to alternate this venue with Catalunya in Barcelona to host the Spanish Grand Prix.

Since then the public roads surrounding the circuit has been used, but the permanent section of the track has been left abandoned. Anything valuable like lights, wires or other form of electronic equipment used for the circuit has been stolen. A small tunnel that went under the track to allow spectators go from one section to another has now been flooded with water.

On the public roads you can still see the outlines that marked where the track went.
Links: en.wikipedia.org, wtf1.com
471 views