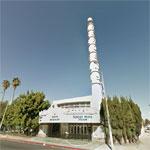 Sadly, however, the Academy Theater never did host the ‘Oscars’, but it was often the location of film premieres and served as a major suburban theater for the Fox West Coast Theatres chain.

The Academy Theater continued to show movies until 1976, when it became a church.
Links: www.lahtf.org
756 views