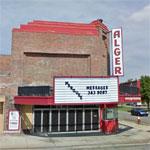 The Alger had its interior modernized in the early 70s. Its exterior, complete with the tower with the theater’s name on it, was left relatively untouched.

In 1977, the Alger stopped showing movies and switched to live shows, for which a new stage was built.

However, by 1983, it was showing movies once again, mostly horror and action films. During a screening of "Friday the 13th Part 5" in 1985, a riot broke out in the auditorium and a fire was set, which caused heavy damage to much of the interior, forcing the Alger to close down.

In 1987, the theater was purchased by a group called The Friends of the Alger, whose goal is to return the theater to its original appearance.
Links: www.algertheater.org
432 views