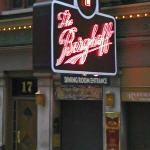 By Parabellum @ 2011-06-21 06:47:50
@ 41.87947, -87.628515
Chicago, Illinois (IL), US
The Berghoff Restaurant is a Chicago classic, serving German-American cuisine and culture since 1898. One of the oldest family-run businesses in the nation, it is now run by fourth generation, Carlyn Berghoff. First generation, Herman Berghoff, opened the Berghoff doors as a men’s only saloon and made his start serving free corned beef sandwiches with the purchase of a stein of Berghoff Beer. Surviving Prohibition and obtaining Chicago’s No. 1 Liquor License, the Berghoff declared itself a Chicago staple. Throughout the years, the Berghoff expanded into a full-service restaurant and continues to set the bar for casual dining experiences.
Links: www.theberghoff.com
436 views