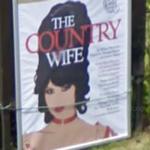 By adrbr @ 2011-06-12 06:42:40
@ 50.859464, .595048
Hastings, United Kingdom (GB)
The Country Wife is a Restoration comedy written in 1675 by William Wycherley. A product of the tolerant early Restoration period, the play reflects an aristocratic and anti-Puritan ideology, and was controversial for its sexual explicitness even in its own time. The title itself contains a lewd pun. It is based on several plays by Molière, with added features that 1670s London audiences demanded: colloquial prose dialogue in place of Molière's verse, a complicated, fast-paced plot tangle, and many sex jokes. It turns on two indelicate plot devices: a rake's trick of pretending impotence in order to safely have clandestine affairs with married women, and the arrival in London of an inexperienced young "country wife", with her discovery of the joys of town life, especially the fascinating London men.

The scandalous trick and the frank language have for much of the play's history kept it off the stage and out of print. Between 1753 and 1924, The Country Wife was considered too outrageous to be performed at all and was replaced on the stage by David Garrick's cleaned-up and bland version The Country Girl, now a forgotten curiosity. The original play is again a stage favourite today, and is also acclaimed by academic critics, who praise its linguistic energy, sharp social satire, and openness to different interpretations.
Links: en.wikipedia.org
448 views