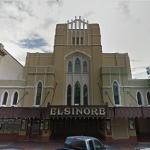 By jbottero @ 2015-03-21 17:18:43
@ 44.93897, -123.037507
Salem, Oregon (OR), US
The Elsinore Theater, which opened on May 28, 1926, is famous for its Gothic style architecture. Into the 1970's and 1980's, the Elsinore operated as a "first run" movie house. But with the decline of the facility, it became a "second run" house, and in the early 1990's the Elsinore closed. Act III Cinemas, which owned the theater building, gave it to the Salem Theater-Auditorium Group Enterprises, who with grants, renovated the historic space into a performing arts center. Classic movies are presented on many weekday evenings, and if the movie is a silent classic, then it is accompanied on the mighty Wurlitzer, 3 manual 26 rank, theater organ. Interestingly, the Elsinore's stage house was originally part of the Capital Theater on the other side of the block.